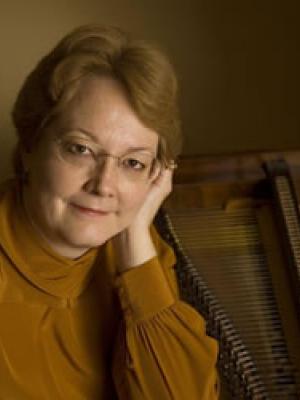 Dr. Wenger holds a Bachelor of Music degree from Kansas State University, a Master of Music degree from the Eastman School of Music, and the DMA from the University of Missouri-Kansas City Conservatory of Music. She has studied with Robert Steinbauer, Barry Snyder, Robert Spillman, Richard Cass, and John Perry. Her students at MU are active in competitions and performances as piano performance and collaborative piano majors.

In addition to her teaching, Dr. Wenger appears frequently as both solo collaborative pianist to vocal and instrumental artists in the Midwest, and coaches art song and opera. She has served as staff accompanist or opera coach at the Eastman School of Music, the Aspen Music Festival, and the International Horn Symposium. She performed as official accompanist for the Music Teachers National Association (MTNA) national and division student competitions for more than ten years.  Dr. Wenger performs and tours with MU’s McNulty/Walter fortepiano, specializing in the music of Haydn, Mozart, and Beethoven.

Dr. Wenger has served as a division president and national vice president on the national board of MTNA. She has presented programs and lecture recitals for the Janáček Academy of Music in the Czech Republic, the College Music Society, the American Liszt Society, MTNA, the Missouri Music Teachers Association, and the Music Educators National Conference.