A memorial event in loving remembrance of Carleton and Sylvia Spotts will be held Saturday, May 8, 2021, at 10:30 a.m. at the Dexheimer Shelter in Cosmo Park.

Carleton, who died in 2014, served as Professor of Cello in the MU School of Music from 1961 until 1994. While there, he co-founded the Esterhazy quartet, MU’s faculty-in-residence string quartet. His wife, Sylvia, who died in December 2020, was a music educator with Columbia Public Schools and in private practice, as well as being a lifelong poet and author of A Quaker Cellist, a volume of her collected works.

Carleton and Sylvia met in New England as young musicians and were married in a simple Quaker ceremony. They moved to Columbia when Carleton accepted a position with MU, and made Columbia their home for all of their years. They have two children, Peter and Dave, who live in Columbia.

Carleton and Sylvia were active in the community, promoting international students, the arts, and environmental and humanistic causes. They both loved gardening, nature, and felt inspired by their circle of close friends and students. They are fondly remembered by their children, three grandchildren, and four great-grandchildren.

Some memories of Professor Spotts from his students (excerpts taken from 100 Years of Music-Making at Mizzou, compiled and edited by Michael J. Budds)

My favorite memory of Mr. Spotts was my walking the halls to find a practice room early in the morning and hearing him practice the Unaccompanied Cello Suites by Bach.  Every morning he practiced without fail.  The playing was so beautiful that it inspired me to work as hard as I could.  He was and will always remain my “musical” father.”
Dr. Linda Kruger, BM 1976, MM 1978, PhD, 1990

In my life as a musician, I have had the gift of kind, generous teachers.  Few people I have encountered, however, could rival the kindness and generosity of Carleton Spotts.  After I performed at state music festival my freshman year of high school, Mr. Spotts wrote a lovely letter to me, telling me how much he enjoyed my performance.  Each year, he took the time to write and tell me how much he enjoyed my musicianship and hearing my progress.  Mr. Spotts helped me attend the Esterhazy Quartet’s summer chamber music seminar, where I discovered chamber music to be my true passion as a musician.
James Nacy, BM 1984

Preparing for my recitals with Professor Carleton Spotts was an entirely new experience for me because I was pushed to do what I never thought I could do or could achieve.
Nestor Omar Tedesco, MM 1991 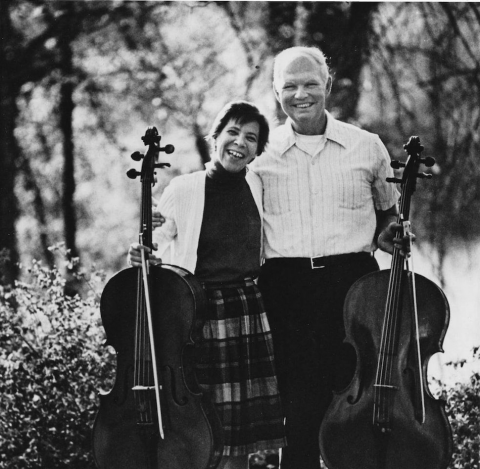