The students in Dr. Peter Miyamoto’s piano studio have been busy recently.  On October 11, eight members of the studio played a program of piano pieces ranging from the contrapuntal beauty of Johann Sebastian Bach to the jazzy stylings of Nikolai Kapustin.  The concert took place at the Lenoir Woods retirement community in Columbia and garnered a standing ovation from a packed Nifong Hall.

All members of the studio will perform on a recital in the Sinquefield Music Center’s Sheryl Crow Hall on Friday, October 28 at 7pm.  A few will return to that venue to perform again in the Mid-Missouri Music Teachers Association’s Collegiate Honors Recitals on October 29 in preparation for competing in the Missouri State Music Teachers National Association (MTNA) competitions that take place at Southeast Missouri University in Cape Girardeau in early November.

Dr. Miyamoto has kept himself busy as well, presenting a full recital of solo piano music by Bach, Schubert, Chopin and Schumann on September 9 and a full recital of works by Wolfgang Amadeus Mozart on the University of Missouri’s historic replica of a fortepiano from 1802 on October 21, watch the livestream here.

The entire piano area will present a mixed recital of piano music in February of 2023. 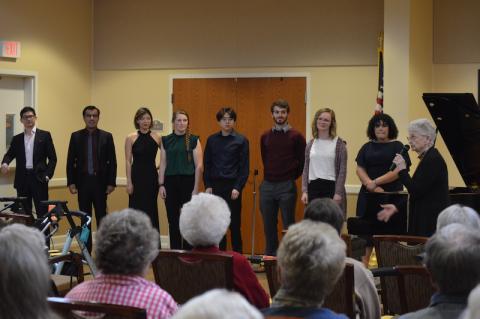