Dr. Knopps is the Associate Director of Bands and Director of Athletic Bands and is most known on campus as the Director of Marching Mizzou.  COVID presented unique challenges to Dr. Knopps as she dealt with the cancellation of the 2020 Ireland trip last March and presenting a band in some fashion to support our football team this Fall.  In the letters of recommendation for this award written by students and colleagues, they said:

“Her tireless drive to provide the best possible experience and opportunity for growth for her students…. She is a constant advocate for her students, continually working for and wanting the best for each and every one of us.”
- Alex Weinzierl

“I have received many comments from students enrolled in our band program about her effective teaching and from audience members who have appreciated the quality of the performances they have observed. In addition, student membership in our athletic bands have grown each year, with more students electing to remain part of the groups that she directs because of the positive feelings that are generated under her leadership.” - Brian Silvey 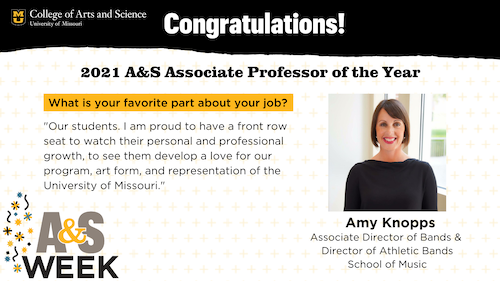 Dr. Peter Miyamoto is a Professor of Piano and primarily teaches applied piano lessons to undergraduate and graduate students.  He is an active performer with many recordings to his credit and active in the community with both local and regional music presenting organizations.  His students also speak very highly of him as a teacher and mentor in their letters of recommendation for this award.

“He creates an environment where the motivation comes from within the student, not from an outside force. As busy as he is in his professional life—and he certainly is—he makes himself as available as possible for extra lessons, coachings, and even advisory meetings.” - Ross Dryer

"I was always  surprised  by  his  ideas  and  wisdom.  From  choosing  repertoire  to  making  music,  he  always considered my preferences and led me to the best possible way. He also helped to map out an appropriate schedule for each of his students so they will have an effective and successful school life." - Gyumi Rha 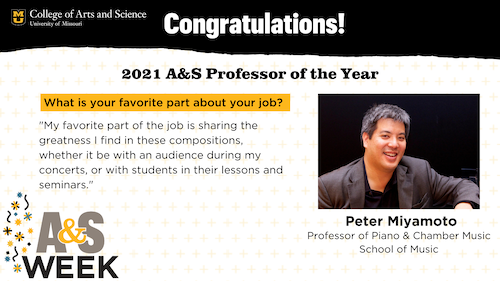 On the alumni side, Dr. Bill Moyes was honored with the A&S Distinguished Service Award.  He was nominated by Dr. Knopps and you can see their interview and congratulatory remarks from Dean Okker here.

In Dr. Knopps’ letter, she praised Bill for his long-time support of Marching Mizzou both with his service and philanthropy.

Congratulations to all three of these recipients and thank you for representing the School of Music so well during A&S Week!