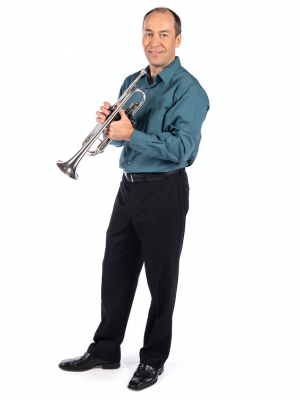 Dr. Iskander Akhmadullin, Professor of Trumpet at the University of Missouri, has performed in orchestras in Russia and in the United States and can be heard on the Marco Polo, Naxos, Hugo, Klavier and Delos labels. He is currently co-principal trumpet of the Missouri Symphony Orchestra. As a soloist and chamber musician, Akhmadullin has performed in the United States, Russia, France, Germany, Austria, Armenia, Japan, Australia, Mexico and Chile. Active as both a recitalist and a chamber musician, he has premiered a number of solo and chamber works. In April 2018, MSR Classics has released Russian Trumpet Sonatas CD by Iskander Akhmadullin and pianist Natalia Bolshakova, which includes 7 world premiere recordings. Critics agree that they “play all the music idiomatically, stylishly,” “with impetus and élan,” and that it is a “considerable source of fun.”

Akhmadullin has been a faculty member of the World Brass Association, the National Trumpet Competition, Midwest Trumpet Festival, and Rafael Méndez International Brass Festival in Mexico. He has performed at the International Trumpet Guild conferences, Missouri and Texas Music Educators Association conventions, and with the American Bandmasters Association, College Band Directors National Association and World Association for Symphonic Bands and Ensembles. In Russia, Akhmadullin has performed at the Moscow Autumn Festival and Russian Trumpet Guild conferences. Previously, he was on the faculty of Southeastern Oklahoma State University and taught at the University of North Texas and Moscow Conservatory. Dr. Akhmadullin holds degrees from the Kazan Music College, Moscow State Conservatory and the University of North Texas. His major teachers are Abbas Slashkin, Vadim Novikov, Leonard Candelaria and Keith Johnson. He is the first brass player from Eastern Europe to earn a doctorate degree from a major American university. Iskander Akhmadullin is an Artist-Clinician for Edwards Trumpets.