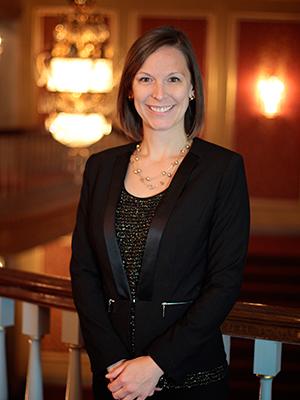 Dr. Megan Arns is a percussionist, ethnomusicologist, and educator with a diverse set of skills and a driven passion for her craft. She is a member of the music faculty at the University of Missouri in Columbia, MO as the Assistant Professor of Percussion, and at Interlochen Arts Camp in Michigan during the summers. Recent past faculty positions include Mansfield University in Pennsylvania and the National Music Conservatory in Amman, Jordan where she was also the Principal Timpanist of the Amman Symphony Orchestra. She has also performed with the Tallahassee, Sarasota, Missouri, Northwest Florida, Albany, Southern Tier and Macon Symphony Orchestras.

Active as a contemporary chamber percussionist, Megan’s recent highlights include collaborative performances in Spain, France, India, Jordan, Costa Rica, Ghana, and the United States at venues such as the Kennedy Center, Millennium Park, Smithsonian Institution, and the Percussive Arts Society International Convention. She is an advocate for the creation of new music, co-commissioning and premiering works by notable composers such as John Luther Adams, Michael Burritt, Alejandro Viñao, Halim El-Dahb, Steven Snowden, Adam Silverman, and Ivan Trevino. Megan regularly performs with two contemporary chamber groups: the [Switch~ Ensemble] – an electroacoustic ensemble based out of New York, and DRAX – a saxophone and percussion duo in residence at Mizzou. She also has extensive experience in the field of marching percussion as a performing member of the Santa Clara Vanguard (Mike Laporta Percussion Award Recipient) and Colts Drum & Bugle Corps, and as a staff member with the Boston Crusaders Drum & Bugle Corps.

Megan received her D.M.A. in Percussion Performance & Literature and M.A. in Ethnomusicology at the Eastman School of Music. She was also awarded performance degrees from Florida State University (M.M.) and Truman State University (B.M.), where she was recognized as a Presser Scholar. Her primary teachers include Michael Burritt, John W. Parks IV, Michael Bump, Bill Cahn, and Nyoman Suadin. Megan is a co-host on the @Percussion Podcast with percussion colleagues Casey Cangelosi, Laurel Black, and Ben Charles. She endorses Vic Firth Sticks & Mallets, Pearl/Adams Musical Instruments, and Zildjian Cymbals.