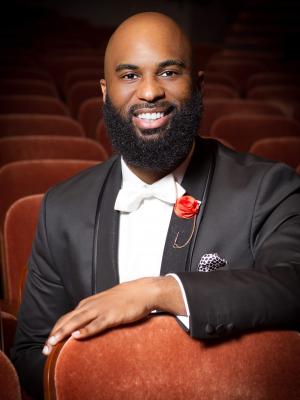 Dr. Brandon A. Boyd enjoys a versatile career as a conductor, in addition to appearing regularly as a composer-in-residence, collaborative pianist, and presenter for conferences, conventions, collegiate choirs, church choirs, choral symposiums, and festivals. He is the Assistant Director of Choral Activities and Assistant Professor of Choral Music Education at the University of Missouri, where he conducts the MU Glee Club and Concert Chorale. In addition to his conducting duties at the university, he teaches undergraduate and graduate courses in choral conducting and choral music education.

As an active composer and arranger, his music is sung regularly by ensembles throughout the United States and abroad. He is also the curator and editor of the "Brandon A. Boyd Choral Series," a choral series with Hinshaw Music Publications helping promote exciting and innovative works composed by both established and new composers and arrangers. His music also appears in MorningStar, GIA, and Kjos Music Press catalogs. In addition, he is the Executive Editor of Gentry Publications.

In 2017, he served as Santa Fe Desert Chorale’s Composer-in-Residence and Community Engagement Leader for their program Giving Voice to the Voiceless. The Chorale premiered a work commissioned by the SFDC, I Search, during their 35th Anniversary of the Summer Justice Concert Series. He served as assistant conductor, pre-concert lecturer, and guest pianist. He set to music a text written by "Poet V," a young participant in the Voces de Libertad program at the Santa Fe County Youth Development Center. His duties also included organizing and conducting the Interfaith Community Shelter Street Choir, thus creating a safe place for men, women, and children experiencing homelessness within the Santa Fe community. Other commissioning partners include Choirs of America Nationals for Top Choirs at Carnegie, Southwestern Adventist University, Florida State University/Tallahassee Community Chorus, New Mexico Music Educators Association, and the University of Nebraska-Kearney.

In the summer of 2019, Dr. Boyd was invited by Universidad Católica Boliviana - San Pablo of the Unidad Academica Regional Tarija to provide conducting workshops, in addition to serving as guest conductor of the Philharmonic Orchestra, Sociedad Corla Andaluz, Symphonic Ochestra in a presentation of American music at the Historic "Casa de la Cultutura de Tarija" (Tarija's House of Culture). In that same year, he served as a guest professor at the Universidad Evangelica in Santa Cruz, Boliviana. The Partners of the Americas sponsored both university partnerships.

In 2020, he made his debut with the London Symphony Orchestra, under the baton of Maestro Andre Thomas, as guest pianist for the Symphonic Gospel Spirit Concert. In that year, he also served as a guest clinician for the NAfME All-National Honor Choir.

He holds two degrees from Florida State University (Ph.D. in choral music education and M.M. in choral conducting) and earned a B.S. in music education (emphasis in piano) from Tennessee State University. He is a proud member of the American Choral Directors' Association (ACDA), National Association for Music Education (NAfME), National Association of Negro Musicians (NANM), American Guild of Organists (AGO), and Chorus America. Dr. Boyd also serves as a member of the National ACDA Composition Initiative committee.